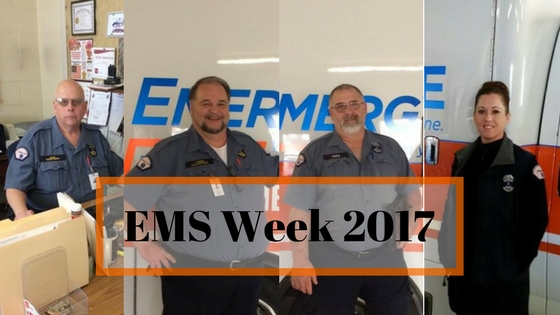 When it comes to celebrating our local heroes, people often talk about police and firefighters, but often forget about the medical professionals who make enormous sacrifices to help us in our times of greatest need.

Were you to fall, become ill, have a car accident, heart attack, or a multitude of other minor or life-threatening events, our local emergency medicine professionals would be the ones to rush to your aid. Until the late 1960s, there was no 911 service in the United States and the first transporters were hearses. In 1965 alone more people were killed in car accidents in the U.S. than in the entire Korean War! As people realized the need and importance of EMS (Emergency Medical Services), the field grew and professionalized throughout the 1970s and 80s into the rapidly growing career it is today.

May 21 – May 27 is National EMS Week and here at Benson Memorial Library we are highlighting our local heroes. We hope to put a name and a story to the faces who care
for you every day. Who is “Behind the Nametag” at Emergycare Titusville? Learn about four of our community members below!

While Paul Clark has been involved in EMS for a great deal of his life, it is not the road he first traveled. Growing up in Union City, he was active in Vo-Tech and became a chef out of high school. However, after seeing his friends become involved in the fire department he took an EMT class and started working for Erie Ambulance Service. He was only an EMT for a short while before he took the paramedic class, part of the first one of its kind in Erie County, and began working as a paramedic in February 1984. In November 1984 he was promoted to Supervisor and has worked for Emergycare since its founding. He has also been a part of Emergycare in Titusville for the past seven years.

Like his fellow employees, Paul enjoys his job immensely and values both its administrative roles and running calls. He effusively explained that being a paramedic is great because it allows you to step in and help in a situation where people are in need. Particularly in a place like rural Titusville, emergency medicine is key because transport times are much longer between the scene and the hospital (as compared to an urban environment) and EMTs and paramedics give care that absolutely essential. Emergency medicine has changed a great deal over the years, and professionals in outlaying areas like Titusville are constantly evolving to stay at the top of their game in service to their communities.

If you have lived in the Titusville area for any length of time and called 911, you have probably met John Hilburn. Born in Pittsburgh, Pennsylvania, John decided to become an EMT in 1981 at twenty-two years old after achieving his CPR certification and at the suggestion of his parents. He wanted a job in the Titusville area and at the time, the ambulance service Gold Cross was hiring and so he applied. In a sort of happy accident, working in emergency medicine would turn out to be a true calling for John throughout his career.

After a few years as an EMT, or Emergency Medical Technician, he decided to take the next step in his career and become a paramedic. While an EMT provides basic life-saving care (basic life support or BLS), he or she is limited by the parameters of EMT education and training. A paramedic provides advanced life support (ALS) and is able to break the skin, such as with starting IVs and providing intravenous medication. Paramedics can also provide airway support (intubate) and give advanced care in cases of severe trauma such as heart attacks or motor vehicle accidents. John was a member of the first paramedic class in Crawford County and has been working as such for the past thirty-two years. He has been with Emergycare the entire fourteen years it has been in Titusville.

In an answer that was repeated by all EMS professionals interviewed for this piece, John said that he loves his job because he was not suited for an office job and enjoys interacting with people. The outdoors is one of his favorite places to be and emergency medicine allows him to be out and about while also positively impacting the lives of people in his community. Something that always brings joy to his life is seeing people he helped, and in some cases saved, living their lives to the fullest. In this writer’s totally biased opinion, he is the best medic in the world.

Shawn Silvis was practically born living and breathing EMS. Though he originally wanted to be in the military, he began volunteering in emergency services at the young age of twelve. Shawn got married at eighteen years old and joined the Tidioute Fire Department in 1981. Ten years later, after being involved in volunteerism throughout his life, he made emergency medicine into his career and became an EMT in 1991. His very first job was with Trans Care out of Tidioute.

At the time, Shawn wasn’t sure if emergency medicine would be his future, but he quickly learned that like many before him, he was called to help others. He has devoted the past sixteen years of his professional life to EMS and forty-two years of his personal life, as he is still active in the Tidioute community.

Like most EMS professionals, Shawn has had to endure the difficult parts of the job. Every EMT and paramedic you talk to will explain that it is endlessly challenging to respond to a call for a person you know or love, or one in which the victim is a child. Having a good memory is both a blessing and a curse in emergency medicine. The good days will stay with you forever, and so do the bad. However, at the end of the day, Shawn lights up when discussing his job – he is passionate about his work and truly cares for the people he has committed to serve. He is currently partnered with John Hilburn, as EMTs and paramedics work in pairs, and as someone with firsthand experience, I can attest that he is one of the best EMTs around.

Our last profile for EMS Week is of Jessica Pierce. Jessica is one of the younger emergency medicine professionals in Titusville, but even in her relatively short career thus far she has impressed her coworkers and community with her high level of skill and service.

Born in Cleveland, Ohio, Jessica grew up watching her father, a career firefighter, serve their community and it piqued her interest in emergency services. After moving to Corry, she jumped into EMS at age nineteen and started at Emergycare at only twenty years old. In the more than a decade that she has been working in Northwestern Pennsylvania, Jessica has thrived in her job because every day is different and she is always meeting new people. While she does not particularly enjoy driving in the winter (few of us hardy Pennsylvanians do!), she is dedicated to rural EMS and takes distance, severity, topography, and levels of care into consideration every time the tones sound for another call.

The number of women in EMS is steadily growing and are no longer a rarity in the field. Around a third of EMTs and paramedics are women in the twenty-first century. The profession is rapidly growing, and Jessica wishes to one day progress in her career and become a paramedic. She serves as an excellent example of where emergency medicine is headed in the future.

As the daughter of a career paramedic, I have been exposed to EMS my entire life. Both through these interviews and through observation I believe there are four main points to highlight as the “Reader’s Digest” version of what emergency medicine is and what it means to work in the field.

If you are interested in becoming an EMT or want to know more about National EMS Week, click here to learn more!