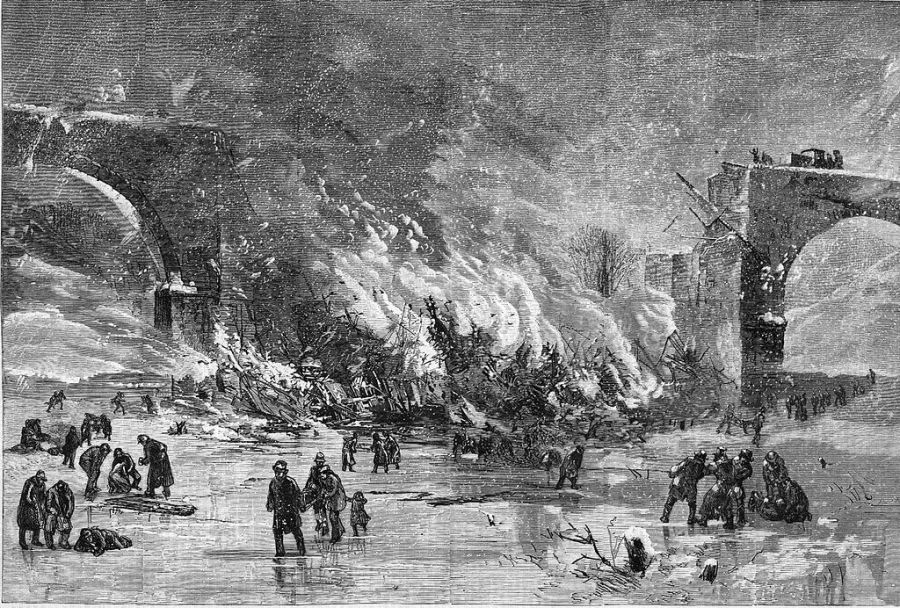 The night was dark and the snow fell heavily onto the moving train, slick tracks, and quiet woods along the Lake Shore Railroad from Erie, Pennsylvania to Ashtabula, Ohio. December 29th, 1876 was like many other winter nights, until at approximately 8:00pm, when everything changed.

You may be familiar with the Great Train Wreck of 1918, the worst rail disaster in American history which claimed 101 lives. But, have you ever heard of the Ashtabula Disaster of 1876? Until 1918, it held the sad title of most devastating rail accident in American history and, though it is lesser known, claimed almost as many lives.

In the early evening of December 29th, 1876, a train on the Lake Shore Railway just made its way out of Erie, Pennsylvania in one of the worst snowstorms of the year. Witness Rev. Stephen D. Peet writes that, “The night was portentous. All nature conspired to make it prophetic of some direful event. The sympathy of the natural with the historic event was known and felt. Ominous of evil, a furious storm had set in…The snow had fallen all day long, and was, at the dusk of night, still falling with blinding fury. The powers of nature had seized it again, and were hurling it down as if in very vengeance against the abodes of men” (18).

Some travelers were persuaded by their families to stay home that night due to the storm, but others were determined to reach their destinations. Fate, as would have it, would not agree.

As the train surged westward, men, women, and children aboard settled in to their nighttime routines. Young professionals sat down to a game of cards while a few older gentleman spent time in the smoking car. Some ladies and their children bid each other goodnight in the sleeping car, expecting to be awoken when they reached their destination.

Suddenly, “the sound of the wheels was stopped; the bell-rope snapped; the lights were extinguished; and in an instant all felt themselves falling, falling, falling. An awful silence seized the passengers; each one sat breathless, bracing and seizing the seats behind or before them. Not a word was spoke; not a sound was heard – nothing except the fearful crash. The silence of the grave had come upon them. It was the fearful feeling of those who were falling into a fathomless abyss. The sensation was indescribable, awful, beyond description. It seemed an age, before they reached the bottom. None could imagine what had happened or what was next to come. All felt as if it was something most dreadful. It was like a leap into the jaws of death, and no one can tell who should escape from the fearful doom” (24-5).

The iron bridge was pioneered in 1865 by president of Lake Shore Railway, Amasa Stone, and passed through regulations (admittedly with deep reservations) by Charles Collins. Based on the Howe truss, the bridge was deemed unsafe by many an engineer and inspector, as the braces were too small and the weight too much for such a structure to handle. After eleven years of bridging the gap over Ashtabula Creek, the bridge collapsed on the night of December 29th under the weight of the snow and the train. The two express cars, two baggage cars, two passenger cars, smoking car, drawing-room car, and three sleeper cars plunged more than seventy feet into the ravine below.

The crash of the cars killed indiscriminately and it was not the end of the terror. Because the train used lamps and stoves, a fire instantly broke out and spread amongst the cars. As the survivors began to escape, some found that their wounds prohibited them from moving and they were swallowed up by flame. Peet writes, “Horror seized the living, for death now claimed its victims, and man was powerless to deliver. Within the awful canopy the flames shot up, and from among them came forth groans and shrieks and cries of agony and despair” (38). The wounded were helpless to do anything but watch as men, women, and children, trapped by the wreckage were overcome with heat and flame and cried into the night for help that would never come.

As the flames raged, some of the wounded stepped out onto the ice below the train, which broke beneath them and the icy water of Ashtabula Creek pulled them under. The rest of the survivors stumbled onto the snowy shores and waited for rescue, dazed from their trauma.

Soon, people from the nearby town of Ashtabula came upon the scene after hearing a ruckus. The fire department roared to the gulf, but the captain refused to put out the flames to the horror of the townspeople and victims. Because Ashtabula did not have a hospital, wounded people were taken to private homes for care. Though this was the only way many were able to survive, victims were also robbed of their valuables and much plundering of the burning train cars was witnessed.

The full extent of the damage was in full view as the sun rose the morning of December 30th, 1876. Broken bodies lay strewn across the ravine, smoldering in the last of the flames. Of the 159 people aboard the Lake Shore Railway train, ninety-two people died either instantly or from their injuries and sixty-four people were injured. Forty-eight of those who died were unrecognizable due to the fire.

In February 1877, investigations were completed into the cause of the disaster and whom would take responsibility. Both Amasa Stone and Charles Collins testified before a court about the design and construction of the bridge, and Collins admitted that it was structurally deficient. On February 8th, 1877, Charles Collins was found dead of a gunshot wound in his home with a revolver in his hand. While society accepted the story of a suicide, police detectives determined that because of the angle of a bullet lodged in the wall beside Collins, his death was actually a homicide. However, they did not investigate his murderer as public sentiment surrounding his death was not much aggrieved. Charles Collins was the last fatality of the Ashtabula Disaster.

At the conclusion of the trial, it was determined that the railroad was indeed responsible for the egregious loss of life that dark December night in 1876.

To read more about the disaster, or to see the original document by Peet, click this link which will take you to an archived copy of Peet’s 1877 book, The Ashtabula Disaster.