The year is 1985. It’s a summer evening in Titusville, Pennsylvania and you are dancing the night away under the light flares of the disco ball while the DJ plays “Raspberry Beret”, “We Built this City”, and other chart-toppers that please the crowd. The building you are in houses a great deal of history tracing all the way back to the oil boom era and in a mere thirteen years will no longer exist. Where are you? Welcome to the Colonel Drake Hotel.

The grandparent of the Colonel Drake Hotel was the Pendleton House, which stood in the exact same location. House was a moniker used often in the nineteenth century meaning hotel. Its frame was constructed from wood and it was named for L.C. Pendleton. The Pendleton name did not last long in Titusville. In 1868 the hotel was purchased by Z. Martin and renamed the Mansion House. On April 3, 1868 the Titusville Herald wrote that, “The house has been renovated from top to bottom, painted, papered and newly carpeted and furnished throughout. Today the old name will be blotted out and Mansion House inscribed in its place. Already it is well filled with guests.”

At this time, the Mansion House was well known for its sumptuous food. Martin served “a wide variety of delicacies from fresh salmon and oysters to duck and buffalo, pastries, fruits, and extensive wine lists.”

As the nineteenth century progressed, the Mansion House changed hands multiple times. In 1882 it was purchased by W.B. Love and in 1890 it was purchased by Gleason-Lockwood. Under their tutelage, the Mansion House was rebuilt part by part in 1897. As one part of the structure was demolished and reconstructed, the next would begin construction. The wood frame was replaced with a yellow brick structure which persisted throughout the rest of the building’s lifespan. In addition to reconstructing the building, Gleason-Lockwood also had wrought iron balconies installed and luxurious finishes added.

It was not until February 1945 that the Mansion House finally became the Colonel Drake Hotel. When the Titusville Hotel Corporation purchased the property that year for $30,000, they wanted to bring the hotel back to its roots and thus, named it after one of Titusville’s most famous former residents. It was renovated and reopened in 1947.

Over the next thirty-five years, the Colonel Drake Hotel operated, but was slowly deteriorating. In 1968 the hotel closed when the owners went bankrupt. It was purchased later that year by Lou Fenetti and Simon Straus for $67,500, but the hotel still continued to fall into disrepair. While it continued on its rotation of owners, it was rescued in 1981 when Bill and CJ Tisi bought and restored it.

The Tisis renamed the two dining areas after the hotel’s historical predecessors: the small dining room became the Pendleton Room and the main dining room was named the Mansion Room. The Mansion Room was divided in half with one section containing ten booths and the rest with individual tables. The booths were made of special dark oak imported from Hartford, Connecticut. The main reception desk contained parts of the original nineteenth century desk and featured black grillwork. 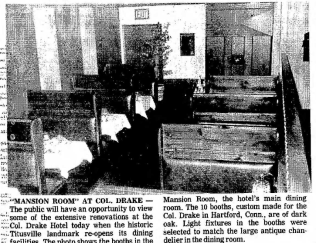 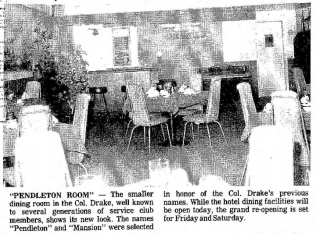 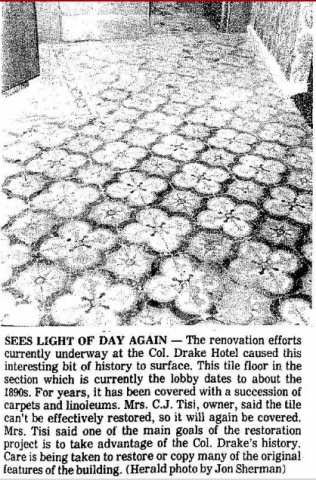 The updated Colonel Drake Hotel featured ten apartments and 24 upstairs rooms. Murals depicting scenes from the early days of Titusville were erected on the Pendleton Room walls and a private bar was installed in the banquet room. The Tisis even found the original chandelier and floor lamp in the basement.

One feature that became very popular with the locals was the DJ stage the new owners added to the lounge that included special lighting and wide screen videos. A DJ was available to entertain guests and patrons three nights a week. The hotel employed eighteen people and was open 24/7 serving daily lunch, dinner, and Sunday brunch. One thing the Tisis were unable to procure, however, was the stuffed swan. The Herald wrote that, “Many years ago, there was a tame swan at Woodlawn Cemetery. When the bird went to its reward, its earthly husk was stuffed and placed on display in the lobby. The relic has since vanished and the Colonel Drake’s new owners would welcome any information as to its whereabouts.” 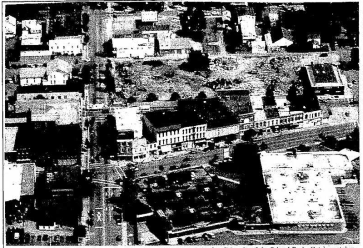 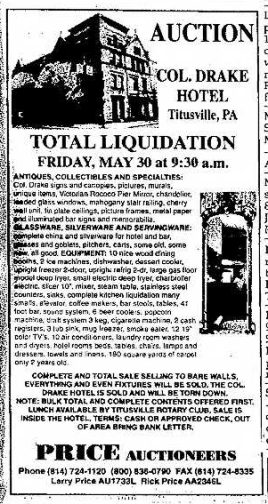 Though many fun times were had at the hotel, it closed in May 1998. Two locals, Dan Wheeler and Frank Davis, tried to seek an injunction to stop the auction of the property, but little could be done as it was already sold to Harry Giltz Jr. of North Canton, Ohio for $220,000. Giltz also bought up most of the surrounding properties so that a CVS could be constructed. Sadly, the Colonel Drake Hotel became a “victim of the wrecking ball,” despite many letters to the editor decrying its destruction.

In September 1998 the construction of CVS began on the lot previously occupied by the Colonel Drake Hotel. In an effort to protect other historic properties, talk of a demolition ordinance was introduced in 2000. Eventually, on May 26, 2009, an historic district demolition ordinance was enacted, creating steps to consider before the demolition of an historic property is settled upon. (See Article 1321 in the Titusville Zoning Codebook for more information.)

The Pendleton House/Mansion/House/Colonel Drake Hotel was the site of both hardship and happiness for many people across the Oil Region and Northwestern Pennsylvania. Though it no longer physically exists, it lives on in countless memories that will continue to be cherished for decades to come.