Ephraim Riley was born in Macon, Georgia in 1856. The Civil War had not yet been fought and slavery was still rampant south of the Mason-Dixon line. In 1875, he moved to Titusville from Cleveland with his family to start a new life. He worked as an oil peddler and later a plasterer and bricklayer in the booming city. His marriage to Anna Burch produced at least four children. The youngest of those children grew to great fame in Titusville and beyond due to his immense talent as a poet, essayist, and painter. His name was Edwin Garnet Riley.

Edwin Garnet Riley was born on September 5, 1880 in the 100 block of West Central Avenue in Titusville (what today is the downtown business district). Riley graduated first from Titusville High School and then from Howard University. He traveled around the United States on fund drives for the Negro Education Institution in an effort to help African Americans achieve the equality, education, and respect they deserve.

Edwin Garnet Riley quickly earned a reputation for his detailed memory, excellent writing, straightforward style, and earnest craft. He was named the first and only poet laureate of Titusville and was the only poet permitted to have his work printed in The Titusville Herald. Riley not only wrote for the paper, but also produced his own essay books and poetry pamphlets that Titusville’s elite citizens sponsored and purchased. The release of a new Edwin Garnet Riley work was cause for excitement in the Titusville community and copies sold out fast.

Riley’s work gained such popularity that he was not only a local celebrity but a renowned national figure. He could count suffragist Susan B. Anthony and National Association of Negro Women founder Mary Church Terrell among his acquaintances.

Beyond his written works, Riley was also talented with the paintbrush. He was a lifelong member of the Trinity AME (African Methodist Episcopal) Church in Titusville and the church was decorated with many of his paintings. Later in life, he also became a minister and served as assistant minister there for many years. In the 1970s, Riley’s daughter, Felicia Riley Coleman also served as minister at the Trinity AME Church.

Edwin was not the only prominent member of the Riley family. His sister, Frances Riley Bolling, who married Dr. G.H. Bolling, became similarly prominent in her Pittsburgh community. Her advice was sought by elites and officials and she founded a school of domestic science for African American woman and worked as a lecturer there.

After the Riley children grew up and moved out, Edwin and Sarah continued to live, work, and worship in Titusville. In 1961, their home was purchased by the school district so that the Carter field area could be expanded. It was demolished shortly after and the couple lived out the remainder of their lives in a home down the street (which is also gone now).

Edwin Garnet Riley died on January 26, 1966. Immediately, the Titusville community began to mourn the loss of one of their greatest citizens. The Titusville Herald wrote that the town “can’t possibly be the same without him. It is quite a loss.” His wife, Sarah, died the next year on June 1, 1967. Throughout his life, Riley’s many creations were celebrated, but he was never appropriately financially compensated for his work. A wordsmith and artist, he unintentionally wrote the most poignant elegy for himself eight years prior in one of his articles for the Herald. It read:

“I have lived a long and somewhat eventful life and my experiences have been many and varied and sometimes critical. I am now crowned with the frosts of many winters but for nearly a period of fourscore years I have kept the even tenor of my way through evil report as well as good. I have impugned no man’s reputation nor have I taken from any man by false accusation. I have never sought fame, knowing it to be elusive. I have never tried to win undue popularity knowing it to be a cheap commodity. I have never craved office or the emoluments of the same. My aim has been simply to serve in my humble capacity. And I have never striven for that which was beyond my reach. I know not what the plenitude or paucity of years may have in store for me, whether of success or failure, triumph or defeat, praise or censure. I am certain of one thing — the past is secure.”

He may never have sought it, but he certainly earned it. Edwin Garnet Riley: Titusville’s most famous poet and essayist. A talent for the ages. 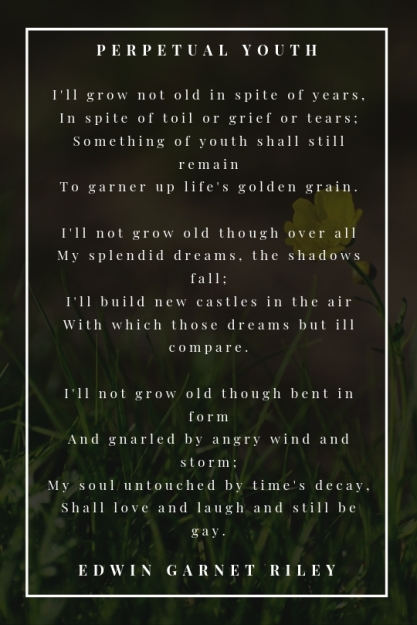 3 thoughts on “Edwin Garnet Riley: The Famed Poet of Titusville”